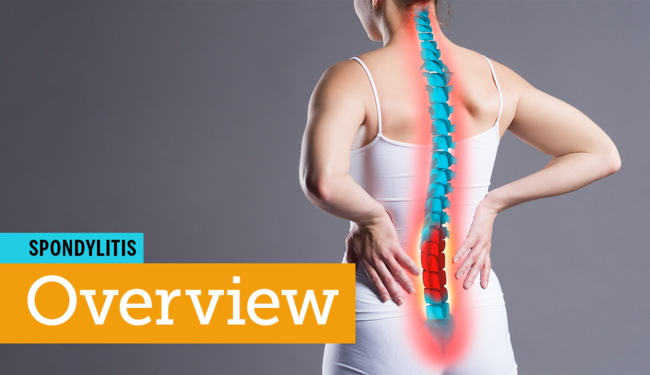 Spondylitis is an autoimmune disease, meaning that pain and inflammation are a result of the body’s immune system attacking its own tissues. No one knows yet exactly what causes spondylitis to develop in some people, but it is now believed that genetics play a significant role.

The History of Spondylitis

In the fifth century B.C., famed Greek physician Hippocrates described five types of spinal diseases, using the terms “kyphosis” and “scoliosis” to indicate spinal deformities. Hippocrates recommended that abnormal spinal curvatures be corrected by stretching the patient on a ladder or a board, applying traction, and shaking the person. A number of ancient Egyptian pharaohs may have had spondylitis. The mummy of Ramses II was examined in recent years and found to have severe spinal fusion.

Several skeletons with ankylosing spondylitis dating from the Middle Ages have been unearthed in Europe. In 17th century writings, German surgeon Johannes Schultheiss described complex devices designed to straighten the spines of those with kyphosis. In the late 1600s, Irish-born anatomist Bernard Connor reported an unmistakable case of ankylosing spondylitis he discovered in a skeleton: the sacrum (triangular bone at the base of the spine), lower 15 vertebrae, and connecting ribs had fused into one mass of bone.

In the 1930s, doctors offered spondylitis treatments such as arsenic, gold, the radioactive elements thorium and radium, and X-rays. These treatments were administered to spondylitis patients long before their safety or effectiveness was studied. Some toxic treatments caused many people with spondylitis to develop leukemia and aplastic anemia years later.

Spondylitis has long been thought to run in families. In 1973, scientists proved spondylitis has a strong genetic predisposition. A specific inherited genetic marker known as HLA-B27 is present in about 90 percent of people who have ankylosing spondylitis. This marker is associated with other autoimmune conditions, including psoriasis, inflammatory bowel disease (IBD), and reactive arthritis.

How Common Is Spondylitis?

Researchers estimate that 1 percent of the population, or 2.7 million, may suffer from spondylitis in the United States. Most people begin experiencing symptoms of spondyloarthritis before age 45, most commonly in their 20s or 30s. Men are more likely to develop spondylitis and tend to present more radiographic symptoms (visible on X-rays) than women.

What Are the Different Types of Spondylitis?

How Is Spondylitis Diagnosed?

There is no one conclusive test for diagnosing spondylitis. Spondylitis is typically diagnosed by a rheumatologist with a combination of a thorough physical exam, personal and family medical history, scans such as X-rays or magnetic resonance imaging (MRI), and blood tests for certain inflammatory markers and genetic factors.

Read more about the process of diagnosing spondylitis.

What Are the Symptoms of Spondylitis?

The most common symptoms of spondylitis include joint pain and stiffness — especially in the spine, hips, and neck. Inflammation can also cause uveitis (eye pain), bowel or bladder problems, and skin rash. People with severe spondylitis can experience fusion of the vertebrae in the spine leading to kyphosis — rounding of the upper back — along with range of motion limitations and difficulty walking or swallowing. General symptoms common in those with spondylitis include fatigue, depression, and anxiety.

How Is Spondylitis Treated?

Treatment for spondylitis depends on the severity of the symptoms. For mild symptoms, nonsteroidal anti-inflammatory drugs (NSAIDs) — Advil (Ibuprofen), Naprosyn (Naproxen), and Indocin (Indomethacin) — are tried first. If NSAIDs do not adequately control inflammation, rheumatologists may prescribe biologic medications, such as Humira (Adalimumab), Inflectra (Infliximab-dyyb), or Simponi (Golimumab).

Some people with spondylitis may benefit from older disease-modifying antirheumatic drugs (DMARDs) such as Methotrexate, Arava (Leflunomide), or Azulfidine (Sulfasalazine). Uncontrolled pain may be treated with opioids. Antidepressants and muscle relaxants may ease other symptoms.

Read more about treatments for spondylitis.

Is Spondylosis the Same as Spondylitis?

Spondylitis and spondylosis are separate and unrelated conditions with some similarities and some important differences. It is easy to confuse the conditions since they sound similar and share many symptoms.

Read more about the similarities and differences between spondylitis and spondylosis.

What Is the Prognosis for Spondylitis?

Kelly Crumrin is a senior editor at MyHealthTeams and leads the creation of content that educates and empowers people with chronic illnesses. Learn more about her here.
hug (20) like (49) comment (21)
sign up to view previous comments 1 of 21

It says in this article that it has no affect on longevity, however when I stated on my insurance policy increase request, that i was diagnosed they denied my life insurance.

Spondylitis - The Path to Diagnosis

Living with spondylitis, a type of inflammatory arthritis, comes with a long list of symptoms....

Living with spondylitis, a type of inflammatory arthritis, comes with a long list of symptoms....
read article >

Ankylosing spondylitis is a progressive condition, but treatment can slow that progression. If...

Ankylosing spondylitis is a progressive condition, but treatment can slow that progression. If...
read article >

You have options if your current treatment is not adequately managing your ankylosing spondylitis...

You have options if your current treatment is not adequately managing your ankylosing spondylitis...
read article >

Many people with spondylitis, also called spondyloarthritis, report changes in their symptoms...