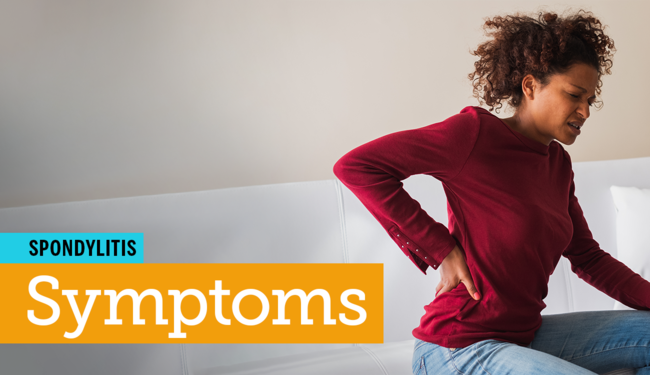 The primary symptom of spondylitis is pain caused by inflammation. Spondylitis pain generally worsens when you are immobile for long periods of time – such as overnight during sleep – and improves when you are physically active.

Where and how the pain is experienced depends on where the disease is active in your body. Joint pain – especially in the spine, neck, and hips – is the most common type of pain reported, but other parts of the body may become affected by inflammation.

Where Can Spondylitis Pain Occur?

Spondylitis can cause inflammation and pain in many parts of the body. Spondylitis most typically involves pain in joints and eyes. Spondylitis pain most commonly affects:

Other Muscle and Joint Symptoms

Spondylitis can cause stiffness and muscle weakness or spasms. These issues can contribute to motor problems such as poor balance, trouble breathing, difficulty walking, limited range of motion, and trouble swallowing. Progressive damage to the spine can lead to ankylosing (fusing) of the vertebrae and posture changes, including kyphosis – rounding of the back.

Spondylitis also causes general symptoms that involve the whole body such as fatigue, depression, anxiety, and problems sleeping. Chronic fatigue is caused by inflammatory processes in the body. Depression and anxiety are common in spondylitis and all chronic illnesses.

Many people with spondylitis report cognitive symptoms, or “brain fog,” such as memory issues and trouble finding the right word.

Some spondylitis symptoms may depend on which type of spondylitis a person has. For instance, those with enteropathic spondyloarthritis experience bowel inflammation and other gastrointestinal problems. People with psoriatic arthritis are likely to have an inflammatory skin rash in addition to joint pain. Those who have psoriatic or reactive arthritis often experience dactylitis, or “sausage digits” – swollen fingers or toes.

Those with spondylitis have an increased risk for osteoporosis – weak and brittle bones – that may lead to painful and debilitating fractures.

People who take high levels of nonsteroidal anti-inflammatory drugs (NSAIDs) such as Mobic (Meloxicam) and Advil (Ibuprofen) long-term have a higher risk of developing both heart and gastrointestinal problems.

At What Age Do Spondylitis Symptoms Appear?

Most people experience their first spondylitis symptoms before age 45, typically in the 20s or 30s.

What Are the Early Symptoms of Spondylitis?

The most common early symptom of axSpA is chronic pain in the low back and buttocks.

Read more about how spondylitis is diagnosed.

Do Spondylitis Symptoms Go Away?

Researchers have not yet agreed upon how to define remission in cases of spondylitis, so it is not yet possible to estimate what percentage of people achieve remission. More clinical studies are needed. However, some people treated with nonsteroidal anti-inflammatory drugs (NSAIDs) or biologic drugs are able to significantly reduce their spondylitis symptoms. It does not appear common for axSpA symptoms to disappear spontaneously (on their own, without treatment).

Read about treatments for spondylitis.

Hi to all this is Susan MAddox I haven’t been around very much but I try to keep up with all the notes. I’m doing fine soaking up some sun now on Easter Sunday it’s a beautiful day. Love to you all💕

Imaging tests help doctors see inside the body, which can help diagnose and monitor people with...

Imaging tests help doctors see inside the body, which can help diagnose and monitor people with...
read article >

Do you have profound, debilitating fatigue with spondylitis (SpA)? You’re not alone. Up to 80...

Do you have profound, debilitating fatigue with spondylitis (SpA)? You’re not alone. Up to 80...
read article >

The Anti-Inflammatory Diet for Spondylitis

Many members of MySpondylitisTeam report that cutting out inflammatory foods helps manage joint...

The Anti-Inflammatory Diet for Spondylitis

Spondylitis (also called spondyloarthritis or axSpA) is an autoimmune disease in which the...

Spondylitis (also called spondyloarthritis or axSpA) is an autoimmune disease in which the...
read article >

Spondylitis is typically diagnosed and treated by a rheumatologist – a specialist in autoimmune...

Spondylitis is typically diagnosed and treated by a rheumatologist – a specialist in autoimmune...
read article >

Many biologic drugs used to treat spondylitis (also known as ankylosing spondylitis) can be...

Many biologic drugs used to treat spondylitis (also known as ankylosing spondylitis) can be...
read article >

In most cases, chiropractic care is not safe for people living with ankylosing spondylitis (AS)....

In most cases, chiropractic care is not safe for people living with ankylosing spondylitis (AS)....
read article >

To determine how you can reduce your medical expenses, MySpondylitisTeam sat down with Susan...

To determine how you can reduce your medical expenses, MySpondylitisTeam sat down with Susan...
read article >

Explaining the Invisible Pain of Spondylitis

Life with spondylitis, an inflammatory disease, can mean living your days in constant lower back...

Explaining the Invisible Pain of Spondylitis

Life with spondylitis, an inflammatory disease, can mean living your days in constant lower back...
read article >

Forgetting names. Losing words. Having trouble concentrating. You may have heard the term “brain...

Forgetting names. Losing words. Having trouble concentrating. You may have heard the term “brain...
read article >