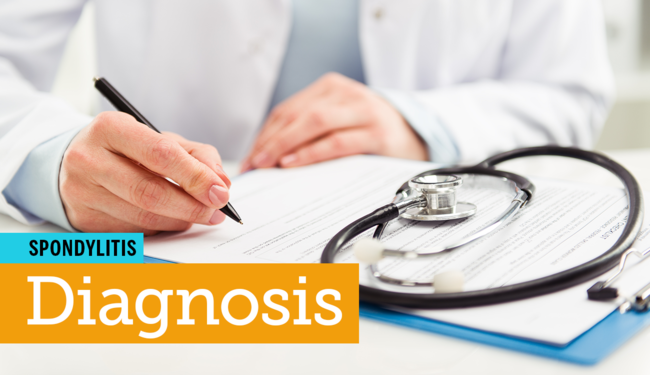 Spondylitis is typically diagnosed and treated by a rheumatologist – a specialist in autoimmune and musculoskeletal diseases. However, most people with chronic (lasting for at least three months) low back pain go first to their primary care physician for help. Spondylitis is often misdiagnosed, or diagnosis is delayed – especially when spondylitis symptoms are mild. Many primary care doctors lack awareness or understanding of spondylitis and may miss the signs. In one study, it took an average of 307 days between the general physician diagnosing back pain and referral to a rheumatologist. Misdiagnosis and delayed diagnosis can delay treatment and allow spondylitis to progress, causing damage to joints.

How Is Spondylitis Diagnosed?

There is no one test that is conclusive for a diagnosis of spondylitis. Spondylitis is generally diagnosed through a combination of a physical examination, family history, blood tests, and imaging scans. The rheumatologist carefully considers many different test results before concluding that spondylitis is the correct diagnosis or ruling it out.

Different types of spondylitis are diagnosed in slightly different ways. Some types, such as psoriatic arthritis and enteropathic arthritis, may develop in people with established diagnoses of, respectively, psoriasis and inflammatory bowel disease.

Typically, the rheumatologist will start by examining your joints to check for tenderness, swelling, redness, warmth, and symmetry – whether symptoms appear on the same joints on both sides of the body. Range of motion, mobility limitations, and associated pain will also be assessed. You may also be asked about the history of your symptoms as well as family medical history with spondylitis or other autoimmune diseases such as multiple sclerosis, rheumatoid arthritis, and lupus.

Diagnosis may also involve blood tests or imaging procedures such as X-rays, computed tomography (CT), or magnetic resonance imaging (MRI) scans. Scans allow the doctor to check for joint damage during diagnosis, and later measure how the disease progresses over time.

Although no lab test is conclusive for spondylitis, blood test results provide important clues that make a spondylitis diagnosis seem more likely or help rule it out.

Blood tests can check overall levels of inflammation by examining erythrocyte sedimentation rate (ESR, or sed rate) and C-reactive protein (CRP). At elevated levels, both ESR and CRP are considered signs of inflammation and can indicate whether spondylitis or another inflammatory condition is likely.

Blood can be tested for the presence of a specific gene, HLA-B27, which is present in many people with spondylitis. The presence of HLA-B27 increases the likelihood of spondylitis, especially in people of European descent.

At What Age Does Spondylitis Start to Develop?

Spondylitis most commonly develops before age 45, with most people experiencing their earliest symptoms in their 20s or 30s.

What other conditions can resemble spondylitis?
Spondylitis is frequently mistaken for other chronic health conditions including osteoarthritis, rheumatoid arthritis, and fibromyalgia. Spondylosis not only shares some symptoms with spondylitis, but also has a similar name. Read about the differences between spondylitis and spondylosis.

Hello. Im sorry. I meant back surgery at HHS 18yrs ago ...rods plates at L4 to S5..then in pain forever.
Now...both knees are shot.
I got total hip… read more

You're invited to a MySpondylitisTeam online Zoom event on Tuesday, March 9. Take this...

You're invited to a MySpondylitisTeam online Zoom event on Tuesday, March 9. Take this...
read article >

Article written by Max Mugambi Ankylosing spondylitis (AS) is an advanced form of axial...

Article written by Max Mugambi Ankylosing spondylitis (AS) is an advanced form of axial...
read article >

Article written by Heather Lapidus Glassner According to a Clinical Rheumatology article on...

Article written by Heather Lapidus Glassner According to a Clinical Rheumatology article on...
read article >

Article written by Heather Lapidus Glassner As many people with chronic health conditions will...

Article written by Heather Lapidus Glassner As many people with chronic health conditions will...
read article >

Article written by Heather Lapidus Glassner Diagnosis can provide a sense of relief to members,...